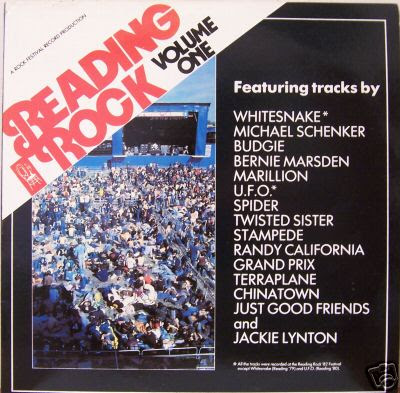 Through the wonders of the interwebs I got to finally hear the live version of Twisted Sister's "Shoot 'Em Down". This is from the Reading Rock Festival in 1982. I first heard this the second time I heard the legendary (in my mind anyway) "Hard Rock Cafe" show (which had NOTHING to do with that lame-ass chain of restaurants) on local radio station KRQR ("The Rrrocker"). The station cleaned up some of the intro and the two hosts Ron & John were joking around about censorship.

Ron: "We had to censor some of this...ah, now John's throwing stuff at me!"
(Ron & John both laugh).
Ron: "OK, here it is live from Reading Rock Volume One, Twisted Sister."

I was pretty blown away by this back in February 1984. This combo of AC/DC riffs (but seemingly louder) and a bit of Nazereth mixed with a New York attitude had me hooked.

Sure, there's no question that Twisted Sister became a joke after they became safe, MTV fare. And unlike Umlaut, my small circle of friends & I weren't hanging out with Metallica and Slayer in '83-'84 hell, we hardly knew who they even were. We were dorks from Pleasanton for fox sake! We loved this song along with the attitude it conveyed. It didn't seem to matter to us that they looked like the world's ugliest trannies. They fukkin' rocked and that's all
that mattered.

My other early exposure to Twisted Sister was
this song which was used as an early promo for MTV. No one outside the New York area seemed to know who these guys were but hell, this was damn good heavy metal band. Yeah, let's forget that Dee Snider cranked up the lame after 1984. (And Metallica didn't?!?) The first two Twisted Sister albums "Under The Blade" and "You Can't Stop Rock N' Roll" are in part undeniably metal. While it's not as heavy as Metallica or Exciter but for the time period just as good.

ENDNOTES: KRQRs call letters are now being used by these assclowns in Chico who play Linkin Park but also have a metal show. It's the old but new again Z-Rock Format. WTF?
Posted by Justin "Thunder" Lager at 9:54 PM No comments:

Metal and Punk Rock Geeks know about the "same name different band" phenomeon. Someone über collector geek at a record swap once told me that there were TWO (!?) Dead Kennedys. The other one was from Cleveland but never recorded anything. Other examples include the three Incubuses (Incubi?) - one from New Orleans that played death metal, a Morbid Angel connected Incubus that also played death metal and the more radio friendly rock band.

In the 80's this was often the case with 3 bands named Slayer (UK, Texas and Hell er...Orange County). What punker hasn't had the Subhumans (Canada) vs. Subhumans (UK) debate? Moving on, we find 3 mainstream fluff-rock or "coke-metal" bands (as Aesop from Ludicra calls 'em): Poison, Warrant and Slaughter. All three names have been splattered about MTV, VH-1, Hit Parader and even Spin. The "bizarro metal" of these three polished & slick outfits were Poison from Germany, Warrant also from Germany and Slaughter from Canada. 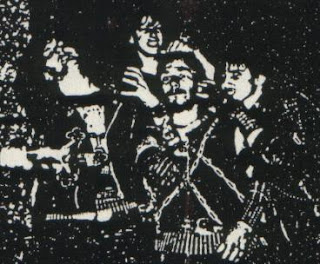 I was introduced to the vile sounds of West Germany's Poison (Hereafter known as Poison WG) by a newsletter called "Power Thrash" I got in the mail. It was from a guy named Gene Khoury in New Jersey. He wrote for Kick Ass zine and DJed the "Power Metal/Thrash" show at Monclair College's station, WMSC. The newsletter contained his playlists and some record and demo reviews. Names of the way brutal Hellhammer, Sodom, Bathory and the then unknown to me Poison (WG) were mentioned on his playlists.

Poison (WG)'s sound falls under that "eternally fukked up" sound that many of the bands that were part of the first wave of Black & Death metal possessed. EX: Bathory, Sodom, Hellhammer, Sacrofago. Their style is SUPER low fi and ugly as sin. Vocals may or not include words or may be complete obscured growls, roars and gurgles. Guitars are almost completely washed out, drums are in the mix and somewhat loud but for the most part this ultra-cult distorted mess is hit and miss. It takes awhile to sink in. Although after a few listens you'll see a trajectory spanning from this tinny, basement in hell-level recordings to Mayhem circa "Deathcrush" through Blasphemy's first weeks of hanging around Ross Bay cemetery. An interesting bit of underground metal history but not something to throw on at yer weddings or parties. 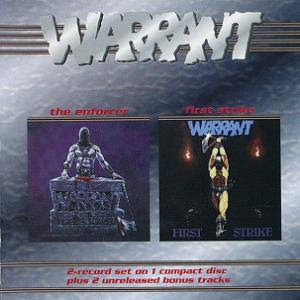 Enough of these downer boys! Deutschland's Warrant mixed up plenty of the hard n' heavy riffing, old-styled power metal and Accept-like choruses. Their 1985 full-length The Enforcer is on par with the intensity of Anvil or Exciter although not quite instant-classic like those two, it's a lot of fun. Sometimes it jumps into thrash. And since we're talking about coincidences their "Nuns Have No Fun" isn't a Mercyful Fate tune but it does have these classic lines:

"Nuns have no fun, they are always on the run 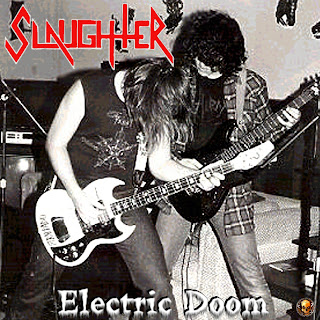 Onward to...Slaughter! We're NOT talking about those Vegas wimps fronted by high pitched chump Mark Slaughter. We're talkin' proto Death Metal rage played at tempos that made Slayer seem slow. Their 1986 "Strappado" LP is defintitive of their name the opener "Disintegator/Incincerator" should be known as much as anything that the big four thrash bands did, it's just that fuckin' great. Twisted genius like this...

is pretty rare these days.

Slaughter had that perfect blend of thrash metal intensity and hardcore's aggression while not being a "crossover" band. They have been name checked by more than a handful of death and thrash metal bands. More recently they've been mentioned by Fenriz of Darkthrone whose newest release "F.O.A.D." features the song "Canadian Metal" that mentions the Strappado track "Tortured Souls". Make way for the In-cin-er-aTORRR and listen to the REAL Slaughter!

Epilogue: I once owned Posin's (er...Poison's) album "Looked What the Cat Dragged In" on a tape. Some L.A. glamoid friends my sister's made me the tape. I listened to it about 3 1/2 times and later taped over it with a prog rock radio show a few months later. I never owned any of the false Warrant or Slaughter albums. By late '87, big hair bands were really stale to me and as mentioned above, I was now a prog-rock nerd but that's a whole 'nuther chapter.
Posted by Justin "Thunder" Lager at 3:51 PM No comments: