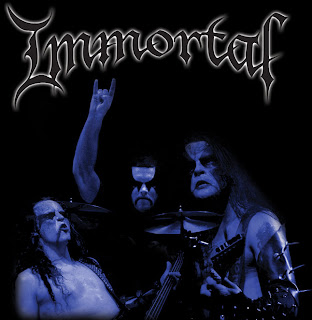 ...the new Immortal's out and it REALLY needs to get cold! It just doesn't feel TRUE without it.

Some choice lines from "Arctic Swarm":

"Through the storm of storm the Aurora lights
In her swirling skies a wrathlike ice
Born to ride the cold, winds of the North
Cometh to freeze the grounds "

Posted by Justin "Thunder" Lager at 12:52 AM No comments:

Of Walls and Whitecross


Take a gander here, this is some goofy, very Reagan-Bush-era stuff. Filmed not long after the Scorpions er, Eastern European citizenry (and NOT WrongOld Raygun) took down the Iron Curtain, Christian Nerf-Metallers or "Ratt-with a bible" - Whitecross did their own take. I'm not too sure what this "new" wall is but the lyrics allude to "Jesus said the Kingdom's just a prayer away". Okkeeey, but your carpenter buddy also said:

"But those mine enemies, which would not that I should reign over them, bring hither, and slay them before me."
(Luke 19:2).

So explain THAT one fluffy-hair prostelyzin' dude. In the terrible taste test, I'm thinking this is just a tiny notch above "Courtesy of the Red, White and Blue".
Posted by Justin "Thunder" Lager at 7:59 AM No comments: