In 1998, I was attempting to put out a 5th issue of my zine Marketing Ploy. I did a small run of the first 4 issues since they were mostly just for friends. Although, the last issue published issue (Vol. 2/Number 2) got reviewed in Factsheet Five  and was supposed to be distro-ed by some guy in Colorado but that dude was a total rip-off. The article I wrote in the last issue "Torn Between Two Turnbuckles: Pro Wrestling: Then vs. Now" ended up in The 3rd edition of book The Zine Yearbook.

My article was alongside some interesting stuff like a Glen E. Friedman interview, a new technology in the workplace piece, and Mike Mannix's excellent "Bang your head to this!" (via Alice is an Island zine). His artcile dealt with masculinity and sexuality in the metal scene. A few months after the Zine Yearbook was published I met Mannix and editor of A.I.A.I zine/his friend Robyn. Robyn was also an occasional columnist in Heartattack zine - which was the 1st place I knew of that championed for better or worse) the then-underground metal-core and screamo, emo scenes. This was also going on around the time that KZSU was playing a lot of this stuff i.e. - Lifetime, Hoover, Converge, Cave-In  and so on...

Although I only met Robyn and Mike once the way I met them is unforgettable. We were at Gilman Street and well, I can't actually remember the show lineup maybe that night. Uh, maybe something like Noothgrush/Deadbodieseverywhere and Benümb ? Anyway, I was standing next to Mike, Robyn and a German friend of theirs when I heard:

Mike: "what do you mean you don't like Accept?
German friend: "Nooo, they're terrible"
Mike: "c'mon dude - Balls to the Wall?!?...Restless and Wild"
Robyn: "Fast as a Shark"
Me: "Excuse me are you talking about Accept?"
Mike: "Yeah..."
(Talk goes into other Accept albums and WTF was with Russian Roulette and the Udo-less Eat the Heat?)

A few minutes later, Mike was complaining about the in-between band music which was some so-so pop-punk. He was shaking his head in disgust while making sarcastic remarks about said band to Robyn. I asked what band it was and he said "Discount". which just too poppy & saccharine for tonight's hardcore/grind & sludge lineup. I also found out that Mike had a record label called Ellington which released early stuff by Ire (who got airplay on Leia Organa's "From the Darkside" show on KFJC), Converge and Shadows Fall.

Summer of 1997, I was involved in the West Bay/Peninsula scene from making flyers and attending shows along with sometimes schlepping equipment for my friends "dork-core" band, Slobber. A number of the Slobber and other punk/metal shows were in the backyard of B Street Music in San Mateo. The backyard fit about 35-40 people and had a little stage set up. The shows ran from Memorial Day to Labor Day weekend. So, with Labor Day being the final one they booked a "mega-show" with 8 bands. Made at Jungle Copy in downtown Palo Alto when I was on my lunch from my stupid-ass sales job.

Breakdown of the bands:

On Mars - Riot Grrl-ish punk from Redwood City, released a tape and were around for all of a month & a 1/2 ?
Lipids - San Mateo weird Minutemen-ish/almost prog maybe even new wave stuff?
Anti-Core -Demented Dadaist art-noise made by one loon from Jacob Ham and the other from Slobber.
Brick - Heavy AmRep/mid-paced rockin dudes from Fremont who shared members with...
Christian Prohibition - Rapid, sometimes messy power-violence-ish / heavy hardcore mix. I'm not sure if either them or Brick recorded anything. C.P.'s vocalist picked up the Examiner with the headline "Princess Diana dead from carcash" and said in his sarcastic voice: "oh I'm sooo saaad boo fuckin' hoo!" and then went into some song against churches.
R.W.S. - I'm not even sure if these guys had a proper acronym or what but it wasn't Red Wood Sity. They did silly power-violence/death-grind stuff that had titles like "Claire Danes" (this was during her My So Called Life-era) and "My Village was Attack by Vikings" followed by "My Village was Attacked by Emperor".  I saw these guys a few times later with Godstomper and with...
Cathy Ames - San Jose kids that were pretty damn ragin'! Fast & gnarly heavy hardcore that REALLY went under the radar. I was lucky to see them on this show as well with Godstomper and RWS a few months later in East San Jose at Musicians Warehouse (another short-lived South Bay D.I.Y. space). Their guitarist Alex was SUPER into Slayer and did a total Clark Kent into Superman transition as before their set we were talking and he was this mellow guy in glasses and an army jacket that was just talking about guitars and his fave metal bands. Then he got on stage and his hair went outward about a foot in each direction and out came the Slayer shirt and onward to headbangin' fury. OK, now here's the interview I did with them. 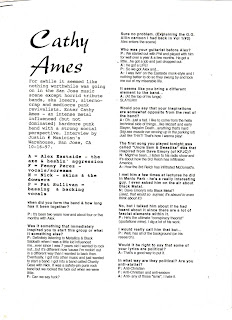 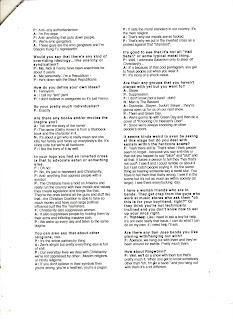 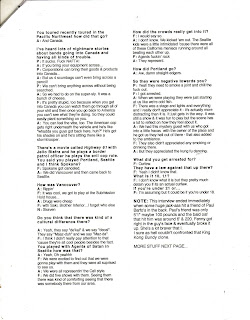 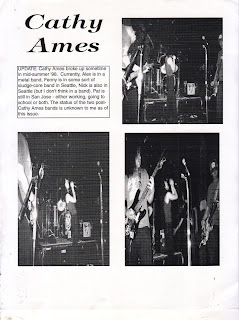 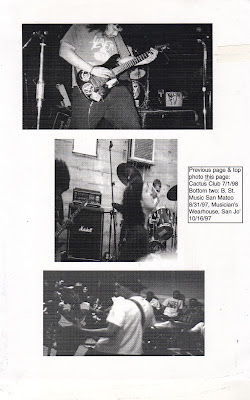 UPDATE DEUX: I saw Cathy Ames play for a 3rd time in Fall 1997 with some dull Pantera-ish band called Resin, Godstomper and Noothgrush at the Cactus Club in SJ. I last ran into Alex sometime around 2005 at a High on Fire show in San Jose. He told me that Fenny was in Seattle working at an art gallery. Prior to Cathy Ames bassist Pat was in pretty cool, raw punk band  called Charity Case. Alex was in the grind/death band Ragweed,  and the deathcore-ish before deathcore act, San Resina  - both of whom I saw in 2001 at the Silicon Valley Metal Fest (which actually ran 3-4 years in a row but unfortunately got overloaded with shitty "goregrind" bands). He's currently plays for SJ heshers, Beerijuana.
Posted by Justin "Thunder" Lager at 3:17 PM No comments: