I just zipped through reading the excellent Cardboard Gods  book. This is a must read even if you're not that into baseball. Josh Wilker's blend of stream-of-consciousness personal history and the backstory behind 1970's and 80's baseball cards (whether real or imagined) is amazing. Wilker's musings on the funny,  awkward  and just plain weird images from these cards inspired this post.

When I first saw photos of  Tim "The Freak" Lincecum, I first thought of his predecessers - Jackie Earl Haley from Bad News Bears (in the 1976 original version not the dodgy Billy Bob Thornton re-make) and 1975 Topps-era Ted Simmons.

Jackie Earl Haley's character Kelly is the team "bad ass", all motorcycle ridin', smokin' and authority defying. He continued on the same path in the cheesy but still good Breaking Training  in '77. In recent years Jackie Earl Haley's played Freddy Kruger and the burn out baskeballer, Dukes in the Will Farrel's excellent ABA tribute Semi-Pro. 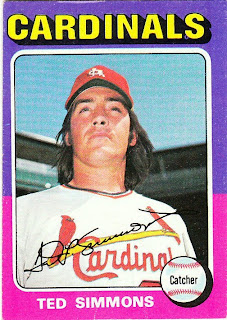 What can we gather from Ted Simmons? He wasn't into smoking the green and it's probably just the sun hitting his eyes on this non-descript angular stadium which may or may not be the Cardinals Busch Stadium. Even if it is just the sun, his heavy worn-yet game ready eyes, the guy-in-the-front-row at Grand Funk hair & sideburns just make you wanna ask him "hey dude, wasn't catching Bob Gibson's fastball like, hella intense?"

Posted by Justin "Thunder" Lager at 9:43 AM No comments:

Don't ask why but I was trying to remember what the Carmine Appice ("Appa-see")  led fluff rock band, King Kobra sounded like. Among the thing I stumbed upon in my results was this primo Metalsploitation clip from McAllen, Texas circa 1986. I completely forgot that W.A.S.P. toured with Duh Nuge much less King Kobra. Though the latter situation makes sense as King Kobra's Johnny Rod played bass on W.A.S.P.'s not that good "Inside the Electric Circus" album. Here's more rock n' shock from the age of the P.M.R.C. 5 Alive has this report...

A day before the show, McAllen went wild for King Kobra. Check @ 1:56 when one of the band members doesn't recognize the guitar in one of their own songs.

These guys also have an amazingly awful video with Louis Gossett Jr. for the movie Iron Eagle that just screams "make me a meme!"
Posted by Justin "Thunder" Lager at 2:12 PM No comments:

(Proper Flyer with Neat-o Images to be posted soon).

Another zine covering Heavy Metal Sub/Urban Hell (and Heaven) featuring: Interviews with people from the Bay Area Metal/Hardcore scene, Metalsploitation – in the movies and the media, The mayhemic world of Nasty Savage, The continuing saga of Danny: “the good little Christian boy”, Broken Entity: the band that should not be, I was a teenage prog nerd, odes to 1980s cable TV/VHS culture, Judge Dredd, Satan & the occult, penbangers/penpals, Temporary Valhalla Zones aka: the greatest 80’s record stores, pro wrestling, totally rockin’ radio, record & show reviews from 1984-90, proper BMX aesthetics , junk food, and even more 7-11s,. Plus: guitar lesson horrors, taking a “mini-vacation from Metal”, and of course the “all-important” stories about: fights, getting wasted and cutting school!
More crud up here: http://hordesofhesh.blogspot.com
“You're nobody's slave, nobody's chains are holdin' you
You hold your fist up high,
And rule the zoo”
– W.A.S.P. – “I Wanna Be Somebody”
Posted by Justin "Thunder" Lager at 9:34 AM No comments: