Oh yeah, those 2 money draining, mass distracting, "what education/economic crisis?" idiots are getting married tomorrow. But fuck all that - here's something REALLY important and worth your time from the UK - Filthy, Rich and Catflap. This fine show is from 1986 and features 3 of the 4 stars from the legendary  (NOT a term I throw around easily) BBC show "The Young Ones" -  Nigel Planner is the stumbling alcoholic showbiz agent "Ralph Filthy",  Rik Mayall's the completely mental and egotistical "Ritchie Rich" along with his roommate and often drunk minder - Adrian Edmonson as "Eddie Catflap".

Instead of the rigors of student life, vampire landlords and Motörhead cameos we have the tales of consistent failure in attempting to break into the entertainment industry. The show maintains some of the same elements that made the "The Young Ones" so classic. Namely, jokes that range from the silly to observations on fame and the media to funny word play. The latter is used mostly by Richie who say "I'm not gonna go to pris(on)", "the crits (critics) will slaughter me!" Similar to The Simpsons it has gags going on in the background. One of which appears in episode five where Richie and Catflap go out to clubs & eateries named "Stringos", "Hippos", and "Lampos" before a final 3am  gorging on Papadum-os.

A lot of the commentaries and jokes are based around British b-level celebrities from the past such as the oft-referenced Jimmy Tarby" Tarbuck who was comparable to maybe Merv Griffin. Also mentioned/referenced are game shows such as "Blankety Blank" and "Celebrity Squares" which were UK parallel shows (not directly related, mind) to America's "Match Game" and "Hollywood Squares".

One of my favorites is in the game show parodies is Richie's guest appearance on the hilariously titled show "Ooer Sounds A Bit Rude". Unlike the Young Ones' direct parody of a real show "University Challenge" (from the same titled episode) this twists the game show from a happy, joyful setting to a place focused on shouting directors going off on camera ops (a thing I know a bit about having worked on a TV news programme) along with the general fakeness of the talent which quickly gives way to utter chaos. Another treat is the visuals on the show - the loud 1970s colors in the "Ooer" scene is only a mild exaggeration of the things worn by Charles Nelson Reily on Match Game or Charo on Hollywood Squares.

Another part of "F, R and C"'s charm is the random bits of slang and language. In one scene Richie is shocked and exclaims "Wot in the name of Satan's Porsche?!" Satan's Porsche woud''ve made a great Butthole Surfers song. A few more of my favorite lines involves a scene with a series of milkman murders. "This is the most milkman shaped stork I've ever seen." Other parts that should give you a few larfs is the lawyer named "Pervy Spurty", and what to do with dead milkman, and why one "little drinky" won't help you sleep.


Along with the entertainment industry, the art world also gets a great send up in the 2nd episode which features the fantastic comedy duo of Steven Fry and Hugh Laurie as Catflap's French patrons. This parody deals brillantly with the whole "what is art?" question and seemingly predicts the forthcoming nonsense of  Damien Hirst and Neckface.

It would be interesting if the show were on now as it could easily play off the contemporary TV show formats of "reality", unfunny "ironic/post-modern" sitcoms and the entertainment shows that report on other entertainment shows so uh, people can be "entertained" or the talk shows that invite other talk show hosts that go into the never-ending cultural-socio abyss. Now I need to watch a bunch of "Bottom" -  the next main venture from Mayall and Edmonson from (1991-95).

http://www.noisetosignal.org/2008/08/filthy-rich-and-catflap
Posted by Justin "Thunder" Lager at 5:57 PM No comments:

As you know YouTube can give you weird random selections/suggestions when you're searching for oh, say French Death Metal from 1996: 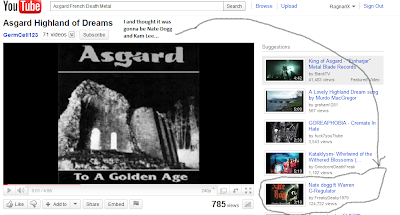 Or let's say you were looking for other Death Metal related stuff such as this early, overlooked Swedish stuff band, Exempt. It tells you to check out Three 6 Mafia. OK, maybe 'cause they're name is really 666 but musically totally, different head totally. That said, I wonder if Gangsta Boo is down with slithery, downtuned Morbid Angel meets early Unleashed style DM with a hankering for hammer-ons/pull-offs?
﻿

Another unintended random barrel o' laughs was this top suggestion I got whilst going through the band who's name can't-be-pronounced-unless-done-with-a-raspy-kackle, Baxaxaxa. 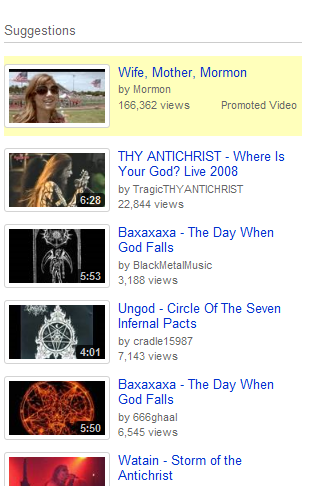 Lastly, I wanted to note that I had a great experience with the previously mentioned band Asgard. I played them a few times on my old show on KZSU, "Bloodstains Across Atherton" and about a year later my friend who was then the Metal Director got an e-mail from Xavier's Asgard's bassist, which was really cool. Makes up for all the times that I thought no one was listening or gave a shit.
Posted by Justin "Thunder" Lager at 4:19 PM No comments:

Early Viking imagery on LP covers comes up with the 1984 comp, Dutch Steel (which either consciously or unconsciously touches on the Viking and other Germanic tribal history in The Netherlands and other low lands  in this is also touched on in the Frisian-born rune magick writer, Freya Asywnn's book. (1)

Even earlier than Dutch Steel on the viking style was the compilation Metal Maniaxe (Ebony Records, 1982). Ebony was the home to bands such as Ebony label home of NWOBHM bands such as Grim Reaper, Savage, and Chateaux. 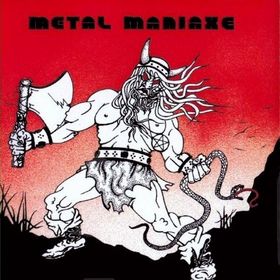 I think he's only sporting the pentagram because it's Ebony's logo.
Additionally, Iron Maiden twice invoked the viking theme with their 1981 and 1982 songs "Invasion" and "Invaders". The original "Invasion" was sung by Paul Di'Anno and was released several times. First on their vinyl debut, 1979's The Soundhouse Tapes, followed by the Harvest Records release as the B-side to "Women in Uniform" (a cover of the Aussie 70's rockers, Skyhooks). Lastly. it appeared again on the 1990 CD version of the "Women in Uniform" EP Here's a few of Invasion's lyrics:

"Thor is riding the sky again
Hear the thunder feel the pain
When we hear the heathen cry
We draw our swords
And the Christians will die,
Feel the pain, feel the pain" (4)
Heavy Load also had several albums covers that took in viking or at least the romanticized version of vikings (horned helmets, et.al.) shown here (5) as well as below. A magazine interview (6) quote from the band says "What we're about as a band (is) reviving the viking spirit that's so much part of our tradition." 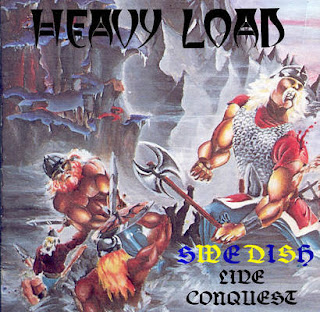 Although other covers went for more of the party rock n' roll tradition. 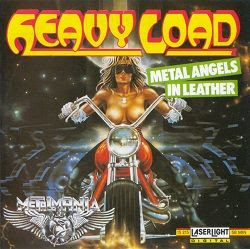 The halmark for the later, Viking/Pagan sound came predominately from a trilogy of albums by Bathory (which of course you should be familar with!) 1988's Blood Fire Death, 1989's Hammerheart and 1989's and 1991's Twilight of the Gods (all titles from Black Mark).

Norway did take to the Viking theme in Metal until the formation of Enslaved who's early sound was strongly influenced by Bathory along with the closer to home bands like Mayhem and Darkthrone. As great as they've been there's been plenty said about these bands. Nowadays, the theme has lost much of its appeal as its ranged from boring folk LORPing-beer hoisting silliness (7) to all-out ignorant shit i.e. - NSBM-tards using viking/Germanic imagery.

1 - Freya Aswynn's has collaborated with Current 93 and Sixth Comm. She is also known for her writings and magick work with runes. "In some sense, one could say she has been to the Runes what Timothy Leary was to LSD." from discussion with Christina Oakley Harrington at Treadwells London
2 - That said, HL's sales in Sweden were often quite strong: "...their first release out selling AC/DC and Black Sabbath for nine weeks in 1981" (Kerrang!, Issue 37)
3 - From "Son Of The Northern Light" the last song on their good but weirdly sung/produced debut Full Speed at High Level (Heavy Sound, 1978)
4 - Both Silver Mountain and Yngwie wrote songs titled "Vikings" (Shakin' Brains, Roadrunner, 1983) and "I Am a Viking" (Marching Out, Polygram, 1985). Jens Johansson later played with Yngwie's Rising Force. His stint in the band was mostly known for doing a highly unnecessary variation of "Dueling Banjos"-gone-metalic-rococo with Herr Malmsteen. On a similar note there's a song by the NWOBHM act Blitzkrieg (featuring the mighty vocals of Brian Ross) called "Vikings".
5 - I'm aware that the artist for Heavy Load's LPs also seemed to predict ultra-bright blonde look of a certain former Ichiban but that's probably coincidence. Me thinks he was more influenced by a continuation of Dust's Hard Attack sleeve by the legendary Frank Frazetta.
6 - I'm not sure of the mag or which band member but it's over on this FB page
7 - So says me who used to go ape for Finntroll and Korprikilanni.
Posted by Justin "Thunder" Lager at 3:48 PM 1 comment: