Let's forget the "official-dumb" of rap-rock/rap-meddle from the late 90's-2000s. Instead, let's focus on the earliest crossovers where they didn't make crappy wrestling intros and the like. Most known is RUN-DMC's re-make/collabo with Aerosmith on "Walk This Way". At my high school throughout most of the year they'd have a lunchtime DJ. The DJs would play everything from Run-DMC, Whodini, Prince, Beastie Boys to the tired ass-AC/DC, Aerosmith & Fred Zep songs that all the conservative heshers at the stoner wall loved (that shit was 8 years too late for my friends & me as we were down with Celtic Frost & Mercyful Fate).

While my own music taste was mostly Hard Rock and Metal - I also was taking in a lot other stuff from other friends. Namely, there was Fred who was in a breakdance crew in 8th grade and schooled me on Egyptian Lover, The Time, LL Cool J, etc. In our junior year art class he was wearing this shirt that said "Throw That 'D" with a duck scratching records on turntables on it. I asked him what that was from and he said from this rap band called 2 Live Crew...I just saw them in Oakland last night". I put going to see a (then unknown) 2 Live Crew in Oakland on par with seeing Baloff era Exodus - you have no idea what kinda mayhem is gonna be unleashed.

Before he was praising many a baby's backs and after his posse was on Broadway, Sir Mixx A Lot was down with Metal Church and did this ace version of the Sabs "Iron Man".


"They couldn't kill the beast - along came the onslaught of Scorpions  and Priest."

Going back to 1984-85, I saw an ad in Hit Parader from Megaforce Records that advertised (alongside new albums from Exciter, Anthrax and TT Quick) a mysterious artist named Lone Rager called "Metal Rap".  Lone Rager was Johnny Z., the head of Megaforce along with members of Blue Cheer and The Rods. Plus the "Children of Steel singers - a chorus of kids from ages 3 months to 10 yrs. old". I knew what the record looked like for years but never heard what is was. It seemed no one even in collector mega nerd circles even knew about this record or at least cared out it. Sure enough my friend Crow found a cheap copy for me at Amoeba one day and I've cherished from that day on.


Peep the crazy Heavy Metal history and geography lessons in the lyrics - totally fresh any day of the week! 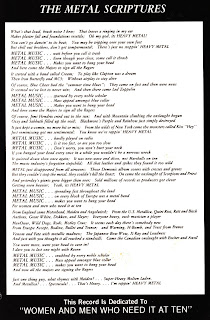 What OTHER Metal or Rap song has ever repped Blue Cheer, Accept and H-Bomb!...etc, etc!?!?

Next up is Anthrax who in 1987 did not one but TWO rap tunes. The first and lesser known is their collabo with UTFO called "Lethal". Joey Belladona's voice doesn't come in until 1:46 which is proceeded by some nice riffage by Scott Ian (said riff sounds like it's a left over from Fistful of Metal or the Armed and Dangerous EP). The line from UTFO "devoted to demolish to slay anyone" easily could've been a line by the (one, true) Slaughter. Though, it is REALLY cheesy hearing a then-"true metal" frontman singing "If the girrrl wanna git it oooon....teylll the girrrrl!"

The second Anthrax-hip hop tune is "I'm The Man" which I can pretty much recite every line of. The song references everything from Sam Kinison to the Fat Boys (note the "yeaaaaah" & the 'lil beatbox bit) to the Mentor's El Duce, and even a tiny clip of Metallica's "Master of Puppets" (@ 1:55). "I'm so bad I should be detention" always cracks me up. I saw them play this tune as their final song when they opened for KISS in 1988 at the SF Civic. Scott Ian had a giant "Not" sign and they jump all over the stage. Totally rad and it sure beat going to school and scooping ice cream for shitty customers at work. My friends and I were planning on doing a lip synched version of "I'm The Man" at the lunch-time talent show (which stupidly didn't let you play live music - it had to be faked) but we couldn't get it together. My plan was to do the totally def UNcensored version.

A few years later when working the late shift at a beach side liqour store in Aptos, CA - the local college station, KZSC played the Public Enemy-Anthrax collab, "Bring the Noise". While I was burnt out on Thrash Metal I continued to get into various hip-hop bands - especially P.E. The open chords of this grabbed me and the tempo of the song gave me a much need jolt of energy and hence I heeded the words "turn it up!"


Call the "cool police" - I still love this

The first college station I heard was KSJS. Along with their usual mix of proto-EBM, punk, goth, etc. was this odd band from Wisconsin, Couch Flambeau. These guys were pretty silly but a lot of fun. More importantly their songs were pretty rockin'. This one is called "Satan's Buddies" and it has a somewhat of  hip-hop feel in the beginning which is very remincent of Faith No More's "Epic". They also diss Sonic Youth for making the song "Satan is Boring" which was likely Thurston & co's diss on bands like Possessed and Slayer. Couch Flambeau made weirdo punky rock n' roll that may that didn't compromise ('ala ideally what much of early hip-hop did).


Along with Faith No More there were a few other bands that mixed rock and hip-hop such as MCM and the Monster who got lost in the shuffle between the rise of "thrash-funk"/"punk-funk" (or whatever the hell Limbomaniacs, Fungo Mungo and all that was) and Red Hot Chill Peppers.

Nerd note: MCM &The Monster once opened for Exodus. Plus, Exodus once played with the Red Hot Chili Peppers and Dutch "party rappers" Urban Dance Squad at Oakland's Henry J. Kaiser Arena in July 91. This is sort of idea was possibly inspired by bands wanting to reach out to other audiences  other weird but interesting tours such as the Sisters of Mercy/Public Enemy/Gang Four (oh, and Warrior Soul) tour of 1991.

There was also the pretty damn silly Metal MC who, is on the short list of MCs with that part of their name at the end (See: Young MC). These dudes look rather hair-farmerish, so they were more like sucker (metal) MCs. 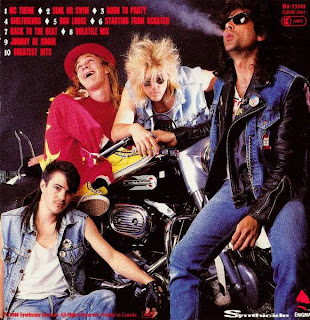 The front cover tells you that there's a deranged metal/rap guitarist behind it's own "Tipper sticker" but really it should've just warned you from a lame record company gimmick.

In the 90's there was several pre-Shrimp Basket collabs such the ones from the ill-fated Judgement Night Soundtrack as well as Ice-T's notorious Metal band, Body Count who inspired this classic Congressional jam led by Col. George Taylor.  Now, wasn't reading this better than buying a $20 "Rap Sucks" shirt?

Posted by Justin "Thunder" Lager at 11:46 AM No comments:


This video is a part live show or live in front of 20+ people rehearsal thing that gives off the odor of a frankensense and myrr scented WAY-off Broadway play about the crucifixion. I mentioned these Seattle-based holy metallers, Bloodgood earlier in a post on similar minded Jezzo-rockers, Stryper. This video is the first time I've ever seen any band use a guy dressed up like Jesus on stage and recreate the scene(s) from 31 (or 32?) A.D. This is an otherwise goofier version of Jesus Christ Superstar (which is pretty goofy unto itself). Though that movie reminds of my former friend,(Danny) in Pleasanton who was a born-again Christian that loved the above mentioned bumblebees. Said past friend & I's conversation went like this:


(Danny): What? You've never seen a movie about the Bible?
(Me): (*Sheepishly*, pun intended) Nope, not yet.
(Danny): Well, you SHOULD!
(Me): Uh, ok like Jesus Christ Superstar
(Danny): Noooooo! That's blasphemous (note: in his universe this movie was "blasphemous" but listening to Blue Oyster Cult, Van Halen and his being a racist dick wasn't? Weird.)
(Me): Oh, I...didn't know that (I only thought "hey it has Jesus in the title - it must be about the Bible and filled with holy stuff).
(Danny): See, you gotta watch The Greatest Story Ever Told and The Ten Commandments.

A few years later via a Billy Crystal record, I found out what a insincere joke The Ten Commandments is - Moses never landed on the Planet of the Apes. Additional viewings of this scene from Mel Brooks always great History of the World Part 1 also underscored that point.
No idea about the latter movie but it sounds a little assholish for them to called it "Greatest Story EVER Told", Tintin in Tibet was a lot more interesting and it didn't confuse or give me nightmares (save the bit about the Yeti).

had told me told me when I mentioned not seeing ever seeing a movie about The Bible before The thing that makes me uneasy about this is that I actually quite like the vocals mixing Saxon's Biff Byford & a touch of Mike Howe from Metal Church but while both have done a few missteps in their career, they never did play high school drama-power ballads like so:

So, Invisible Oranges can write a bunch of articles about what mode/key Metallica songs are in but who's ever gonna school you on late-80's Christian drama metal?
Posted by Justin "Thunder" Lager at 4:50 PM 2 comments: