Best lyrics of the year?

“One day there was a mascot war, the body count was large
Metal vs. cereal, and Eddie led the charge
Toucan Sam was kneecapped and his beak was smashed apart
When Murray clubbed him in the face and then ripped out his heart

Silly Rabbit didn't look, was in for quite a shock
When Vic Rattlehead came from behind and brained him with a rock
Snaggletooth impaled Booberry on his piggy tusks
And then roasted him, his breath turning the undead fiend to dust

It's a mascot war

Grim Reaper jumped his motorcycle through a church window
There he found the Corn Flake Rooster, killed him with a solid blow
Jack-O-Lantern took one of the seven keys, said "die,"
And then Lucky, that poor bastard got it crammed into his eye

Honey Bee and Chaley battled high above the ground
With a hammer of his head the winged skull, he won the round
Flotzilla towered high above the battle, with a chop
It was doomsday for deceivers known as Snap, Crackle and Pop

Count Chocula, a wooden stake inside his heart, was slain
It was placed there with no mercy by bloodthirsty Baphomet
Cap'n Crunch was stomped upon and then his head was pissed
Because Sargent D was coming and he was on his list

Breakfasttime your time is up
Show the Honeycomb thing no fear
Hold fast and stand your ground
Our time is now, our moment's here”
Posted by Justin "Thunder" Lager at 10:00 PM No comments: Then today I found this: 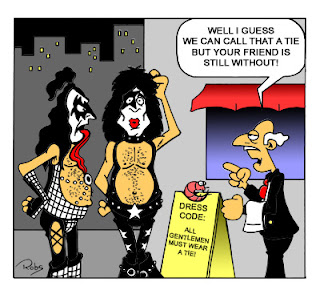 I dunno when this guy Rob from Denmark made this cartoon but I think we were on the same page, so to speak. Controversy? Nah, more like coincidence. Rob's site didn't have his "about" section active so I have no idea about him aside from being a random guy in Danmark who likes hard rock & metal and makes cartoons. My Danish isn't good enough to figure out much else. But this is really awesome regardless.
Posted by Justin "Thunder" Lager at 8:55 PM No comments:

Messrs Blackmore, Glover Lord & Paice play a half-hour long version of "Mandrake Root" bombed out of their skulls. Ian Gillan does the very stoned & giggly intro. Audio via >WFMU's wonderful "Beware of the Blog" and DP's Live In Aachen, Germany 10th July 1970 This version is only half of the entire thing. I might be daring enough to play the whole thing on KZSU someday.

Led fuckin' Zeppelin could never pull this off - their strength was the rhythm section whereas Deep Purple was a BAND. Dare I say Purple was heavier and much more intense? Beyond "Smoke on the Water" and maaaybe "Highway Star" they're pretty much unknown on American radio. They were giants in Japan & Scandinavia but they sure as hell weren't a "two song wonder" like say Foghat or some drek. Unlike Zeppelin they rarely had that "bloated" feeling which isn't so much Zeppelin's fault as it is the dumb-ass hardcore fans and the coke-addled marketing machine that's behind their legacy. You wanna take this up some more? Meet me after school - by the bike racks. The bike racks!
Posted by Justin "Thunder" Lager at 12:20 PM No comments:

If by chance they give you the slightest bit of grief
Or perhaps they notice you're a liar and a thief
If they dare to question your lunatic beliefs
The wicked web you weave
The slimy trail you leave
Or maybe they perceive they've been misled
Trot out the dead"
- Hammers of Misfortune, "Trot Out The Dead"

Even though I'm only affiliated with Stanford's radio station , I'm still curious about what goes on the campus. War criminal Donald Rumsfeld last Fall land himself a cushy job as a Visiting Fellow at Stanford's Hoover Institute. Some of the more conservative staff members on campus thinks the anti-Rumsfeld campaigns are "an implicit threat” to Hoover and “a kind of McCarthyism.”

OK, so, a "threat" as in blowing up the building threat? Or a telling him his a self-centered prick who's only looks out for himself & his cronies in fear of Rummy going on a shooting rampage at Stanford Mall? McCarthyism? They're just not gonna hire him. McCarthy destroyed people's careers and in many aspects their lives. Multi-administration, lifetime bureaucratic creeps like Rummy don't know what it's like to go to over 20 different job interviews in a month and still be rejected. He has it made-full stop. He'll get a book deal (If he doesn't have one in the works already) and likely a think tank gig somewhere else and there's always FoxNews. Ironically, that these conservative rich guys are feeling like Rumsfeld is being "persecuted for his beliefs" as if he's some kind of oppressed minority?

"Secretary of State Condoleezza Rice is on leave from Stanford and indicated she plans to return after her time in Washington. Must she, too, be sent packing in the interests of tolerance, honesty and open inquiry?" - Answer is NO because for one she's a "Stanford Graduate" who didn't seem to learn anything about taking action after she "believes" she read a report "titled Bin Laden to attack America". Stanford graduate, folks. Secondly, it has nil to with tolerance, honesty and open inquiry considering she's made her career and enhanced many of the other crooks in the White House's career by doing the exact opposite of these three concepts.

"And Hoover, after all, is a conservative think tank, with close ties to Republican administrations." Fine. I don't have a problem with guys the furrow their brows, write poorly written editorials and wear giant glasses. But I DO have a problem with the pro-torture and privatizing defense stance of Rumsfeld. In fact, Nation reporter Jeremy Scahill who broke the story on Blackwater, notes Rumsfeld's post-9/11 policy:

"It became known as the Rumsfeld Doctrine. "We must promote a more entrepreneurial approach: one that encourages people to be proactive, not reactive, and to behave less like bureaucrats and more like venture capitalists," Rumsfeld wrote in the summer of 2002 in an article for Foreign Affairs titled "Transforming the Military."


If you're that close to Haliburton and Blackwater you are guilty of working with war criminals and therefore are an accomplice. Last I checked the "politically correct intolerance" (as defined as censorious left-wingers and not apparently black & white world having censorious Bush cronies) was coming from people ranging from the Army War College who said the Iraq War was a mistake (real commies, that lot), ex-Clinton and Bush's former chief counter terrorism expert, Richard A. Clarke and many of the military people themselves who don't like Haliburton and Blackwater due these private contractors being far better equipped and paid at 10-20 times as much as regular soldiers.

Posted by Justin "Thunder" Lager at 2:51 PM No comments: