Surgical Droid 2-1B from Empire Strikes Back

reminded me a lot of Clint Miller of Team Kuwahara

Kuwahara was the top Japanese BMX company that made the bike for E.T.  They along with Araya Rims (not made by the guy from Slayer) were the top 2 companies from Japan for BMX equipment. Going back to my last post's Hesh-BMX connection is this image found whilst looking for 80's BMX:

2nd from right & 2nd from left made the right t-shirt choice.

Posted by Justin "Thunder" Lager at 9:00 PM No comments: 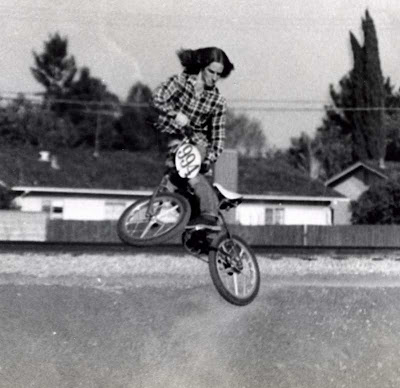 Snagged from BMX Plus! forum and also a reminder of a "full-circle moment" as not only was it sort of recently the anniversary of Cliff's tragic death in September 1986.

Also, two weekends ago I was at the Frisco Freakout Fest and spotted a guy in a BMX Reunion shirt. We talked about old school BMX for quite a while and we realized that we might've actually raced against each other at the Fremont ABA track (in Jan-March '83).

Anyway, here's Cliff is holding a copy he just signed of one of the greatest (and most opinionated *) 80's Metal zine, Kick Ass.

* As in editor "Nasty" Bob Muldoney hated King Diamond and Mercyful Fate along with W.A.S.P. The first he called Queen Rhinestone and the latter's singer was deemed Faggy Balless. On the other hand, he did support TONS of killer bands such as Burton-era Metallica, Bathory, Nasty Savage, Overkill. In addition, it was one of the few bigger circulation Metal zines that supported crossover bands (i.e. Broken Bones, C.O.C., etc).
Posted by Justin "Thunder" Lager at 10:41 PM No comments: