Open a new tab for each and listen to this.

Or try it this way and mix it yourself.
http://www.twoyoutubevideosandamotherfuckingcrossfader.com/#ECvnlslYJDw/JXXe2aVa1Ek
Posted by Justin "Thunder" Lager at 10:31 PM 1 comment:

Where are all the songs about BMX? 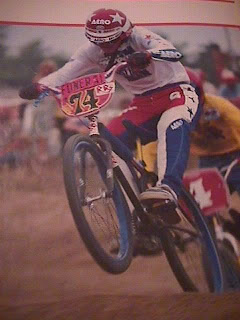 Early Death Metal style Cruiser Class
Circa: '82
Skateboarding has it's share of songs starting from the mid-60's extension from surf songs. Then into the 80's the deluge of "skate punk" "skate hardcore" bands (The Faction, The Boneless Ones, JFA, Suicidal Tendencies) and the skate-connections with Anthrax, Metallica and Overkill. Not to forget Pushead and his designs for Zorlac boards. I like skateboarding but more for the aesthetics not for the actual activity. I found that you couldn't go in as many places. Hence no dirt riding = no fun. Also, I wasn't keen on getting tripped up by pinner sized rocks on my Gemco-bought boards.

Enter BMX, which I was totally obsessed with from 1979-84 and have re-obsessed myself in recent years from utter hatred of X-Games/freestyle crapola the latter of which I hated in the latter half of 1983 when Hutch was making pink frames (what is this, the Vinnie Vincent Invasion?) and within the next year flourscent neon blasted their ways through their own visual hell of neo-freestyle, surfing, and a few years later the jock-ulars (jocks+populars) at my high school where sporting key-lime colored shorts with bright orange "Life's A Beach" tees.

Moreso, BMX it was becoming like skateboaring with more street than dirt and really I was about both. When the X-Games stuff gave way to a glut of even worse corporate sponorship than we had in the 1980's era (I'm not saying BMX wasn't totally mainstream, it would be apt to say, compare it to the growth of Thrash Metal as it often got mainstreamed/family oriented in a few years time but this is different than the completely whored out Mountain Doofuses that represented the sport in the mid-late 90s. In short, the early era racers mostly endorsed things that had to do with their sport. This Scholastic Deth song sums it up better in "Extreme = Mainsteam" but...now I can't find the lyrics. (Not like you can't schnoogle "Scholastic Death + blogspot") tho' this pic says a lot about it: 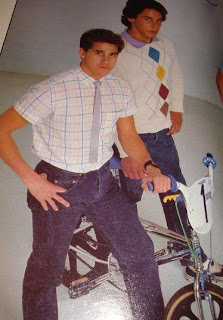 Yuppie-jocks win again!
Aka: the fall of Bob Haro.
Anyway, how come with all the millions of kids out there that have at one point or another been into BMX are there so few songs about it? Here's a few I've found here

SundayBMX21 "bring me the horizon, four year strong, the devil wears prada all good bands that are fast"
Yikes! On Vital BMX's Forum I found this guy who's at least in the general vicinity of good-to-great:

procesion by New Order
sonic reducer by dead boys
pillbox by the joneses
romeos distress by christian death
rest in piss by brotha lynch
old school shit by eazy-e
I found a clip from Matt "Freestyle Mainstream dude I barely paid attention to" Hoffman's* video game features the great: Bad Brains, Newclus, Pailhead, the not too bad - Stone Roses and the truly awful Static X. About a year ago I got a cheapo pop punk compilation (Know Your Neighbours #1) that I HOPE would be saved by a song called "BMX" by The Bigoz Quartet, instead I got super generic whiny pop punk crap that references the movie "Rad" which should've been called "Sad".

The so-so pop-punkers Bouncing Souls released a tune simply called "The BMX Song" which is pretty fun and references even Timmy Judge (not my fave but they get points for diggin' deep).


If i had money i'd buy a new BMX
it's a long walk through the city in the
rain it's along walk from train to train.
We'll build a ramp and do some tricks and
try to impress some chicks then we'll put
on some really dark shades and run over
all the dorks with rollerblades...
crossups, tabletops, endos curb endos,
timmy judge! get rad!
if i had money i'd buy a new BMX
On the better side o' things, customized van-rockers, Fu Manchu have 2 BMX connections - the song “Anodizer” which mentions number plates, tuff mags, (GT) Pro Perform(a) bikes. Tho’ I have no idea what 4130, throwin’ tabs and KT scars are.  Plus, their tune called “Mongoose” which seems to be about the OG BMX scoots: “A back road in a dirt town lives…all time/Out on the street they ride…the mongoose flies on by”. Though the best BMX-music connection I've found so far minus Fu Manchu is on a Morbid Angel fansite outta France
I like to ride my BMX bike and do some silly things with that. Whatever. I definitely like to play and have fun. I think that's great.
Keep in mind this is called "silly" AFTER Trey discussed his admiration for Deepak Chopra, Tony Robbins AND that he has a Doom II clan called "Sailor Scouts".

* ENDNOTES: Hoffman was, in his early racing days on Skyway's team which at that point I wasn't following too closely then. I mostly checked out the first wave of freestyle when R.L. Osbourne of BMX Action and Eddie Fiola (also of Skyway)  Skyway as you may know was the company that made the first plastic-ish mags out of some material called Zytel aka: Tuff Wheels (Mark) I/Tuff IIs and their respective knock-offs from ACS, et. al. Also 1985 most thing BMX for me (going back to the Hutch reference above) were quite pukey lookin'


The total highlight of '85 was the colors that popped up. CW made an exclusive deal with Skyway to make lavender Tuffs, which were soon followed by light green, orange, pink, etc... This was definitely a bright year!

Ugh, fuck that noise! What's wrong with the colors you already have? Red, black  and white work fine for most Metal covers.
Posted by Justin "Thunder" Lager at 11:58 PM No comments: