Seriously? A band called "Happy Days"? This is literally saaaaad! I like the basics of the "depressive" Black Metal sound but this is pathetic - it's just a kid whining some "Psych 101" stuff about "denial" and "staring at the pool of razorblades". A pool? Wouldn't a goldfish bowl of them be enough? Must be the work of some stereotypical "emo" teens with a penchant taking the sonics of Burzum,
Xasthur and Leviathan and completely fucking it up.

This one man band creates some of the tinniest, shittiest guitar playing and vocal whining you'll ever hear. Really I don't think this is real. I think this sad fucker named Morbid wouldn't get his music on the jukebox in the satanic version of Al's Diner.

Metal Archives reveals they have a demo called "Alone and Cold". I get the first part but "cold"? Dude, you're in Miami! 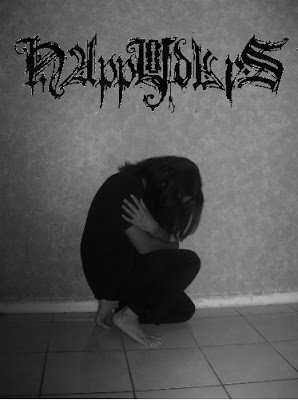 And his side project is called Deep-Pression.
The Fonz ain't gonna like this...
(Inverted Thumb)"Ayyy!"(Inverted Thumb)
"Meeet me in 'da office, kid!"
Posted by Justin "Thunder" Lager at 12:43 AM

I've seen the logo's font used by other bands before.

It actually looks like the logo reads: "Nappy Daps".

This blog is very infantile...
You dudes aren't able to listen to Black Metal. You are only able to find something fun everywhere. Great...
Go play with your plastic soldiers, it will look more serious and "true" for you...