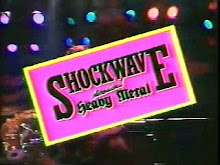 NOTE: I wrote up this review initially in 1996 (!) when I rented this vid from Palo Alto's (now MV's) Videoscope. I figured I'd unearth this since it might be of interest to yas.

Shockwave was a one shot Heavy Metal festival in 1985 put together by the owners of the underground Belgian label, Mausoleum (who used the similar logo as the 1983 horror film). The organizers wanted to film the bands live but ran into a connundrum - this is underground Heavy Metal on small indie labels but we could at least get coverage from the Metal fanzines like Metal Hammer (which was then only available in German), Aardshok - or better yet, Kerrang or Metal Forces. MTV's not going to touch this with a 50 foot pole. So they decided to do it themselves and the results are well...read on. "Shockwave" was also the title of a rather good Beligan band o' Motörbangers called Killer. The cover to Killer's Shockwave" always reminded me of the movie poster of The Keep. 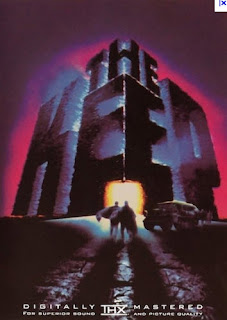 Since many bands were starting to release videos, the label saw it fit to not just focus on one band (and really didn't Mausoleum have 40+ bands signed by mid-1985?!?) and showcase many a metaller from Belgium, Germany, the UK, and 1 act from the USA.

Belgium's Lion's Pride - have a couple of OK but very standard riffs the vocals are in that mid-range of rough but sort of melodic sound like say, Loudness or a early 80's metal version of the guy from Agony Column. A little bland overall but sometimes interesting. I do remember seening their LP in the Record Factory in Dublin, CA sitting on the shelf for close to a year. They even put the damn thing on an end cap - thinking "somebody's GOT to buy this..." This isn't from Shockwave but this is from the same-era.

Polish bangers T.S.A. (T.S.A. stands for "Tajne Stowarzyszenie Abstynentów", which means "Teetotallers Secret Association") are up next. They were the first Polish band to make it outside their counties borders. (Turbo and Wilczy Pająk (aka: Wolf Spider) were only known by a few tape traders. Some goes for Vader who didn't take off 'til 5-6 years later). As of 2010 these guys were still playing shows (or at least some form of them). Their singer looks like Rudy Schenker of the Scorps. On a similar German metal tip, their 2nd tune on the video "Race Machine Hero" is a nice, tight speedy number that sounds right off of Accept's "Restless & Wild". Even rougher vocals than Udo. oh and, never mind the lame drum machine intro/outros.


Alaska's 2 songs are really 2 songs too many. This is the unholy equation of: Bon Jovi + John Waite (the guy mostly know for that P. Diddy sampled on "Missing You") + Tesla = puuuuke! The only "significance" this band had was Mel Galley, Bernie Marsden and Don Airey played in the early, slightly listenable version of Whitesnake. Although, Airey at least played on much better records with Ozzy and Colosseum II. Regardless of their rock resumes this is pure pomp rock hell.


Belgium's own Crossfire laydown a couple of good numbers. The Metallion site puts it aptly: "The band's music is a mix of NWOBHM, Quiet Riot and AC/DC and is nowhere near as thrashy as one would expect...Fans of everything from NWOBHM to boogie metal to Motorhead may find something here, while others may be disappointed by the lack of distinctiveness or creativity." Although supsrisingly they make all of these things work. Also, they had a song called "Killing A Cop" which granted wasn't as threatening as M.D.C. or Ice-T to "the man" but still - Belgian cops were (and probably still are) dicks to metalheads & punks. As Ali "TheMetalion" writes (again from The Metalion). And yes, they have silly mustaches and spandex but at least they did it then when that was pretty normal.  Besides, Mantas' Beligan doppelgänger is on left guitar. (Not sure if which of excellently named 6-stringers this is: Nero Neerinckx or  Rudy Van de Sype). This tune may or may not be from "Shockwaves" but it filled with some raw imagery & a rather rippin' tune'.


Germany's Faithful Breath make some vague hard rock/sometimes Metal sound with this collision of Raven/Accept and Nazereth. All of this is odd since they started in the early 70's as a prog band! Plus, they all wear furs and the vocalist has a generic but nice viking helmet (Note: real vikings DIDN'T wear horned helmets but still they do look pretty rad if you're in a German metal band in the 80's). This isn't from "Shockwave' but it was a great song from them the exudes tough & true 80's power metal. The visuals are super-discount video but I admire bands when they just do these cheap-ass videos with the intent to just have fun and rock out. Who needs some "conceptual video" like Queensryche when you can kick ass on a viking boat made of Legos on a lake? Even the ever fading color of the video gives it that extra charm. How I love my "discount metal".

McCoy (featuring John McCoy from Gillan and Mammoth) are pretty awful. There's no clip of their footage but when you can imagine how half-assed they are with lyrics like ones here (OK, the riffs in here are good but maaaan!). Often their tempos trudge like a turtle on downers then they throw in dull "bluesy" tempos and there was some "biker mama" type in band that just made it weird and lame.

Next up with "On the Attack" is New York's Blacklace. Maryann Scandiffio's vocals here clumsy sort of like a off the mark Halford. The riffs are OK but the song's overall is a chock-a-block with dull cliches. bit above passable, the riffs are good & tight. Yet the solos and overall structure are pretty generic. Guitarist Carlo Fragnito's Eddie Van Halen-ish hot doggin' on the fretboard is no help either. The next tune this tune's in someway isn't too far from Christian Mistress. Visually there's an excess of stripes, fringe and lace aren't exactly making them standout in Circa: 1984 HM. Although, they do a bit better on the next tune "Call of the Wild" but that's due to their answering the question "What if Krokus circa: Headhunter had a female singer and sorta sounded like a Christian Mistress outtake?"

Lastly and not live at all is Venom's videos for "Witching Hour" and "Bloodlust". These are more like "performance" videos. Especially considering the massive amount of guitar wailing during "Witching Hour" which show Mantas not even holding his guitar! Still, these are 2 pretty potent versions of two of their early 80's classics. If you want to experience these songs in full - go check out the 1996 reunion show at Dynamo or their '85 "Hell At Hammersmith" video.

Endnotes: Zoinks! After writing all this I found someone's done an entire blog for this videotape! Let me introduce you to your new friend, Shockwave Heavy Metal Blogspot.
Posted by Justin "Thunder" Lager at 8:39 PM